Peter Zumthor signed off on one of his most international projects in 1996: the Therme Vals spa complex. Two decades on, there isn’t an architect in the world who doesn’t long to relax in the evocative waters of this space and discover the secret to its architecture.

In the mid-1990s, the, el 7132 Hotel, in the Swiss town of Vals, decided to harness the water of the only thermal springs in Graubünden canton and offer its guests and customers an excellent combination of design, gastronomy and a rewarding sensory experience of cold and heat, light and shadow, using water as a resource. 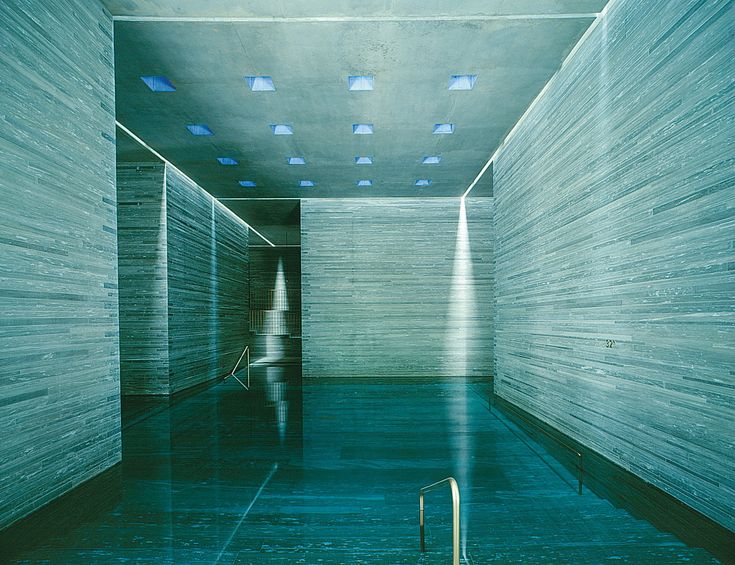 Zumthor designed a relaxing space with exquisite taste, where you can experience water at 10ºC and 42ºC. A place where only one material accompanies the water: Valser quartzite. This natural stone is present throughout the area around the spa, on the roofs of the houses in Vals, in the fences around the plots of land, on the walls and also on a sturdy bridge that joins the two shores of the river that crosses the valley. Quartzite is a very beautiful and highly appreciated material and the spa – with more than 60,000 carefully crafted pieces used in this fantastic project – has showcased it to the rest of the world.

In any case, the spa is not the only jewel in this hotel. The kitchen has just received its second Michelin star. Based on a cuisine with strong Italian and Austrian influences, chef Sven Wassmer and his wife and sommelier Amanda Wassmer Bulgin have delighted the most discerning palates on the planet.

The hotel launched a new entrance hall designed by Thom Mayne in July 2016, representing a new contribution to the powerful strategy to boost its name as a high-end reference hotel. The revamp also involved the work of Japanese architect Kengo Kuma, who designed the three 90 sq m suites on the top floor of the complex. Tadao Ando played a further part in the hotel’s strategy. Three Pritzker prizes at the service of business and the hotel’s upstanding guests.

The Most Spectacular Rooftop Pools

A natural public pool near Basel

A Pool for Taking in the Stars

This website uses cookies to improve your experience. We'll assume you're ok with this, but you can opt-out if you wish.AcceptRead more